Could the Boston Airport Taxi Crash Been Prevented?

On Monday, July 3, several pedestrians were injured in Boston when a taxi driver lost control of his vehicle and unintentionally crashed into a group of people near a Logan International Airport taxi pool, just west of the airport. At least 10 fellow drivers were injured in the accident after the vehicle crashed into a picnic table, some of them seriously, according to the local police. The driver now faces charges of “operating to endanger” due to operator error.

The location of the picnic tables, including the one that was struck, should have been safe from vehicle traffic, but this space was unfortunately vulnerable to vehicle impact. However, this accident may have been prevented with the use of traffic posts, among other safety devices.

How Traffic Posts Can Help in Such Situations

Traffic bollards are commonly used to keep pedestrians safe in designated areas where vehicles are restricted, often lining storefronts and other areas with heavy foot traffic. While these devices are known for being able to protect pedestrians, many spaces don’t utilize them when they should, as shown in the Boston airport crash.

There are several types of traffic bollards that are used in certain areas depending on the level of accessibility needed. Many of these posts are designed to withstand low- to high-speed vehicle impact, which may have helped prevent the Boston airport taxi crash.

There are three main types of traffic bollards that a wide range of facilities use: fixed, removable, and collapsible. The type of bollard needed will depend on a number of factors, including the amount of foot traffic the area experiences, vehicle traffic, and the overall landscape of the area. Determining the feasibility of a bollard in a particular application is up to the end user and may require an analysis by a traffic engineer. 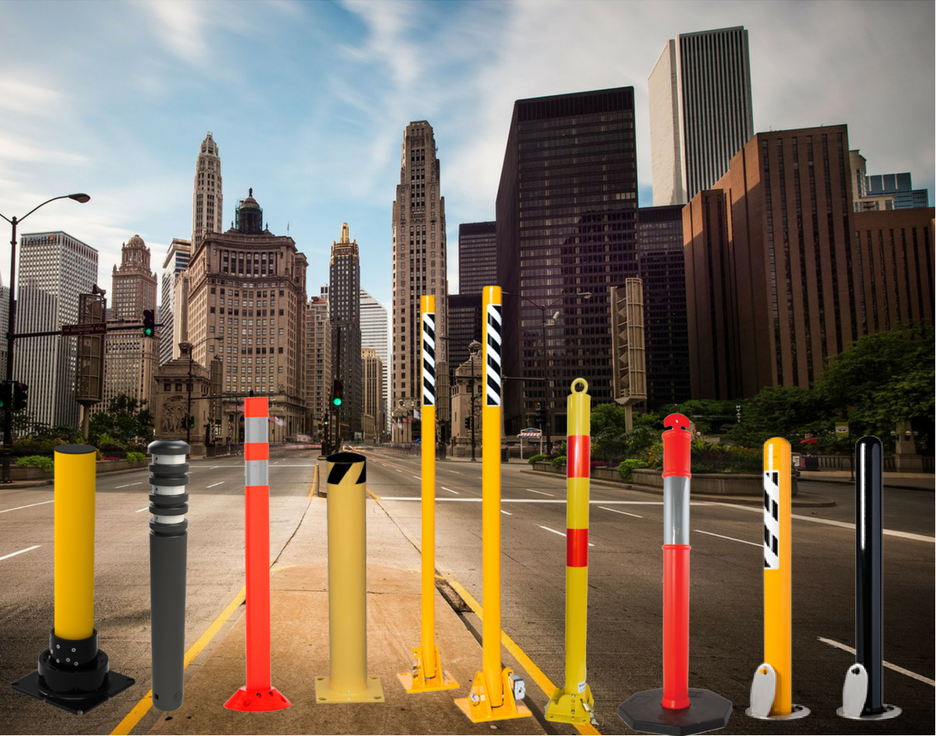 Fixed posts are permanent installations that can provide consistent protection in many spaces. They are also ideal for other pedestrian-heavy areas such as storefronts, residential areas, and park perimeters.

Removable posts can offer protection for many types of locations, protecting pedestrians from low-speed vehicle crashes. These allow users to lock them in place using different types of locking mechanisms, while allowing for removal at any time if vehicles are allowed access to the area at specific times. Removable bollards are typically installed in locations such as parking lots and streetscapes that only require temporary protection.

Collapsible bollards can provide protection, but typically act as a visual deterrent. Users can unlock and lower them at any time to allow vehicles of a certain clearance to pass over them, oftentimes in the event of an emergency. Locations such as park entryways and emergency access roads may utilize these to allow vehicle access at certain times.

Keeping Pedestrians Safe At All Times

The main purpose of traffic bollards is to protect pedestrians from vehicle traffic, but they can also help regulate traffic and influence drivers to slow down through visual deterrence, while also protecting many types of property from potentially devastating damage. The installation of traffic barriers such as bollards at public spaces may help protect pedestrians as well as the establishments themselves from incidents such as the Boston airport crash.

When you subscribe to the blog, we will send you an e-mail when there are new updates on the site so you wouldn't miss them.

Ocean Springs to Protect Property & Citizens with ...
The Ultimate Guide to Traffic Control Devices
Subscribe to this entry Unsubscribe this entry

No tags has been created yet